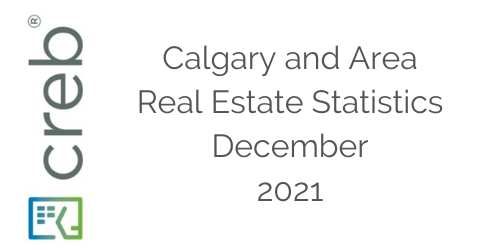 “Concerns over inflation and rising lending rates likely created more urgency with buyers over the past few months. However, as is the case in many other cities, the supply has not kept pace with the demand, causing strong price growth,” said CREB® Chief Economist Ann-Marie Lurie.

We are entering 2022 with some of the tightest conditions seen in over a decade. As of December, inventory levels are nearly 25 per cent lower than long-term averages for the month. This will have an impact on our housing market as we move through 2022. More details on the housing market forecast for 2022 will be released on Jan. 25.

December sales reached record levels despite further reduction in new listings. The strong sales have caused inventory levels to drop to a mere 82 units, which is the lowest they’ve been since 2005. Overall, Airdrie recorded a record 2,299 sales this year. This is 78 per cent higher than activity recorded over the past 10 years and is 36 per cent higher than the previous record set in 2014.

Airdrie’s strong growth in housing demand could be related to the relative affordability of detached homes there compared to Calgary and less concern among consumers over commute times, as some companies shift toward hybrid work options. Bringing on new supply has been a challenge in Airdrie, and this has driven some significant price gains in the city. Overall, annual benchmark prices hit a new record at $380,867 in 2021, nearly 12 per cent higher than last year’s levels and two per cent higher than the previous annual record.

Despite persistently low levels of new listings relative to sales, Cochrane’s sales reached record levels in 2021. However, the sales-to-new-listings ratio has exceeded 100 per cent for four of the past six months, causing inventories to drop to the lowest levels seen in over a decade.

This has caused further tightening in the market, as the months of supply has remained below one month over the past two months. The exceptionally tight conditions, especially over the past few months, have caused further price gains. As of December, the benchmark price was nearly 10 per cent higher than levels reported last year. Overall, on an annual basis, the benchmark price has increased by seven per cent, reflecting a new record high for the town.

Despite persistent challenges with supply levels, sales in Okotoks reached record levels in 2021. However, the strong sales weighed on inventory levels, which on average eased by 41 per cent this year and remain over 50 per cent lower than what the market typically has available.

Easing inventory and strong sales left the months of supply at record-low levels in December with less than one month of supply. With sellers’ market conditions throughout the year, there have been some significant gains in prices. On an annual basis, the benchmark price hit a new record high at $474,842, which is an annual gain of nearly nine per cent.