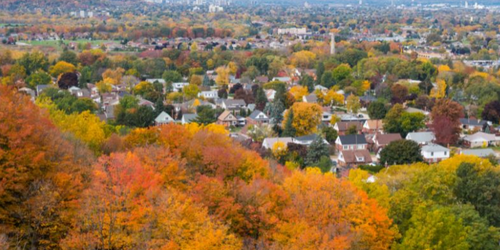 Toronto, ON and Kelowna, BC, September 28, 2022 – RE/MAX brokers and agents are anticipating the national average residential sale price in the Canadian housing market to decline 2.2 percent in the final months of the year (September-December), according to RE/MAX’s 2022 Fall Canadian Housing Market Outlook Report. This market moderation comes on the heels of rising interest rates, record-high inflation and broader global and economic uncertainties that have impacted consumer confidence and market activity. Bucking the downward trend, seven out of 30 Canadian housing markets analyzed are likely to experience modest price appreciation between 1.5 and seven percent. Meanwhile, RE/MAX brokers and agents expect a decline in sales this fall, in 18 out of 30 markets surveyed.

In a survey of RE/MAX brokers and agents, 25 out of 30 said rising interest rates have affected activity in their local residential market this year, with some indicating that this has been the biggest factor impacting homebuyer and seller confidence – a trend that is likely to continue for the remainder of 2022. These insights are supported by a new Leger survey commissioned by RE/MAX Canada, which reveals that 44 percent of Canadians agree that rising interest rates are compelling them to hold on buying a property this fall, while 34 percent say they won’t hold.

“While we are still facing significant housing supply shortages across the Canadian housing market, many regions are experiencing softer sales activity given recent interest rate hikes. This provides some reprieve from the unprecedented demand and unsustainable price increases we’ve seen across Canada through 2021 and in early 2022,” says Christopher Alexander, President at RE/MAX Canada. “However, the current lull in the market is only temporary. Until housing supply increases, these ‘boom’ and ‘bust’ cycles will likely be a recurring event.”

“Despite the fact that nearly half of Canadians are waiting to buy or sell a home, we’re confident that as economic conditions improve by mid-2023, activity will resume,” says Elton Ash, Executive Vice President, RE/MAX Canada. “Timing the market for short-term investment is extremely difficult and rarely successful. But as a long-term investment, the Canadian housing market continues to yield solid returns. If someone needs to buy or sell, regardless of those cyclical peaks and valleys, being informed and working with an experienced real estate professional can help consumers clarify some of those unknowns and make the best decision possible.”

RE/MAX brokers and agents in Canada were asked to provide an analysis of their local market this fall and share their estimated outlook for the remaining months of 2022 (September-December).

Western Canada and the Prairies

In regions such as Vancouver, BC, Victoria, BC, Kelowna, BC, and Edmonton, AB, RE/MAX brokers reported rising interest rates as a factor impacting local market activity, resulting in softening consumer confidence, fewer multiple offers from buyers, and a shift toward more balanced conditions between buyers and sellers. In all regions analyzed in Western Canada and the Prairies, with the exception of Calgary, AB and Edmonton, AB, the average residential sale price is expected to decline between zero and 6.5 percent.

In Calgary, AB, interest rate hikes and recession worries have not had a notable effect on the market, due to the region’s relative affordability. As such, a modest three-per-cent price increase is expected through the remainder of the year. In Edmonton, AB, rising interest rates have had the greatest impact on homes priced from $500,000 to $1,000,000, while those priced at $400,000 or less are still relatively affordable and a good entry point into the market, despite the current economic climate. Edmonton is likely to experience a modest price increase of 1.5 percent for the remainder of the year. In both Vancouver, BC and Edmonton, AB, demand for luxury properties has remained stable, with interest rate hikes having a minimal impact on this segment of the market. This is expected to continue into the fall months. Low inventory remains a pressing concern in Kelowna, BC, Victoria, BC, Vancouver, BC and Calgary, AB, and is expected to place upward pressure on home prices in 2023 and beyond. In contrast, recent commercial and industrial developments have eased inventory concerns in Winnipeg, MB for the time being.

Much like other provinces across the country, Ontario has not been immune to the impacts of rising interest rates. Many markets including Oakville, Windsor, Barrie, Durham, Kingston and Kitchener-Waterloo, anticipate – and in some cases already experiencing – a reduction in the number of units sold over the coming months. Apart from Oakville and Muskoka, average residential sale prices in Ontario are likely to remain steady or decrease between two to 10 percent in the fall months.

Similar to Western Canada, the luxury market has remained resilient and in demand among buyers in Oakville, despite rising interest rates and a looming recession – a contributing factor to the modest two-per-cent average residential sale price increase expected in Oakville this fall. Muskoka continues to attract homebuyers to the area, while simultaneously, many sellers are eager to sell before year-end. Given a steady stream of demand, Muskoka is expected to experience a modest five-per-cent increase in average residential sale price this fall. In Peterborough, interest rate hikes and the subsequent effects on the stress test have eroded affordability in the area, which is the main factor contributing to the seven-per-cent decrease in average residential sale price expected in the coming months. The return of conditional offers has been a prevalent trend across the province, including in Kingston, Kitchener-Waterloo, Muskoka and Peterborough. Echoing many regions across Canada, Durham, London, Sudbury, Ottawa, the Lakelands and the Greater Toronto housing market are expected to regain balance in 2023, albeit with low inventory continuing to place upward pressure on prices. As one of the more affordable markets in Ontario, Thunder Bay is unlikely to experience any significant fluctuations in average residential sale prices this fall.

Similar to Western Canada and Ontario, economic factors such as rising interest rates and a possible recession have contributed to decelerated home-buying activity in the region. Charlottetown, PEI experienced immediate impacts as interest rates rose, with the number of sale transactions reduced by almost half on a month-over-month basis, particularly among properties in the $500,000 to $1,000,000 price range. Despite these circumstances, Atlantic Canada continues to attract out-of-province buyers due to its affordability, relative to the rest of Canada. The majority of Atlantic Canada housing markets analyzed are expected to experience modest price increases through the end of 2022, including Halifax, NS (+1.5%), Moncton, NB (+6%) and St. John’s, NL (+7%). The outlier is Charlottetown, PEI, where average residential sale price is expected to decline by two percent in the fall months.

Housing affordability continues to attract buyers in Moncton, who have been able to leverage the recent decrease in demand to negotiate with sellers and include conditions on purchases. Meanwhile in St. John’s, NL, economic pressure from rising interest rates has resulted in extended rent periods by would-be buyers, despite this region anticipating an increase of seven percent in average residential sale prices. The trend has been further exacerbated by low housing inventory. However, recent “green” government announcements and initiatives are anticipated to boost the local economy and in tandem, the housing market. In spite of concerns over supply falling short of demand, Charlottetown, PEI is expected to regain more balance in 2023. However, inflation coupled with the increased cost of living will likely result in a moderate two-per-cent decline in average residential sale prices through the end of 2022.